Panufnik spent the first forty years of his life in Warsaw, except for short periods while studying in Vienna and Paris and travelling on concert tours, and a year spent in Kraków immediately after the Second World War. Warsaw was the place where he was born and educated, where he had his first successes, and where he spent the turbulent years of the war, during which his brother was killed. It was also in Warsaw that he took the dramatic decision to escape from Poland – his last domicile in Poland was a Warsaw address.

Panufnik’s Warsaw includes the places where he lived, the Warsaw Conservatory where he studied, and finally the Warsaw Philharmonic (which became The National Philharmonic a year after Panufnik’s escape), which saw the premières of his early works, and where he was Director for a short period.

Panufnik came back to Warsaw in 1990, when he was able not only to revisit his friends, but when, most importantly, his works made a triumphal appearance at the Warsaw Autumn Festival. 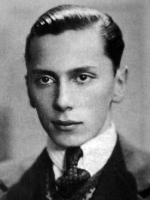