Socialist realism and escape from Poland

The era of socialist realism in Polish music began with the National Conference of Composers and Music Critics, which took place during 5-8 August 1949 at Łagòw Lubuski. There, socialist realism was officially proclaimed as the required direction in music. Polish composers came under pressure to create 'committed' art, which was to find its expression primarily in songs for the masses and in cantatas.

In order to avoid the pursuit of socialist realism goals on the one hand, and the accusation of being a formalist on the other, Panufnik decided to concentrate on arrangements of early music, continuing the path of development initiated by Divertimento, composed in 1947. This led to the writing of the Old Polish Suite and Gothic Concerto (Concerto in modo antico). At the same time his more ambitious works, such as Nocturne, Lullaby or Sinfonia Rustica (composed in 1948) were accused of formalism and practically ceased to be performed. 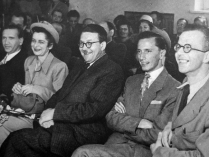 The years of socialist realism brought not only constraints on creative expression; composers were also expected to participate in the government’s required cultural policy. Andrzej Panufnik, as a public person, who also held genuine authority in the musical community, was more and more frequently asked to speak publicly on matters which had little to do with music. Soon he was appointed to serve on a number of committees working for the defence of peace, which involved the necessity of being present at interminable meetings and sessions, as well as various commemorative events of which there was a virtual epidemic. The situation was additionally complicated by the aspirations of his own wife. 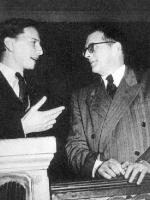 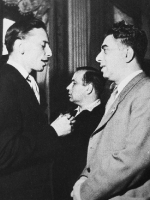 In the early 1950s, the composer’s private life underwent fundamental changes. In the summer of 1950, at the Centre for Creative Work at Obory near Warsaw, he met a beautiful Irish woman, Scarlett, who at that time was married to the writer Adolf Rudnicki. The two young people embarked on a passionate affair, which culminated in their marriage in July 1951. However, the marriage was not a happy one – the differences between their characters soon became apparent. To make matter worse, the composer’s father died in September 1951, which left his niece Ewa, who was being brought up by her family in Silesia, as his only living close relative. 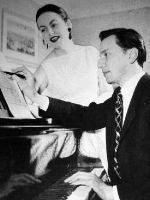 Panufnik’s important position in the highest cultural and political circles of Communist Poland during the early 1950s allowed his wife to be part of that little world. Scarlett adored social life, and she was delighted and intoxicated by the status accorded to her as the wife of the leading composer of the Polish People’s Republic. She held it against him that he longed to stay at home and concentrate on composing.

During the period when socialist realism was the official doctrine, Panufnik had to make certain concessions to the communist rulers; since he occupied the position of the 'premier' composer and conductor in the land, this was practically inevitable. These concessions resulted in a few mass songs and Symphony of Peace, written in 1951. Symphony of Peace in particular secured his artistic position, but at the same time increased the authorities’ expectation of the artist’s deeper involvement in matters beyond music. Feeling trapped in this situation intensified his inner frustration and brought about a growing creative crisis.

At that time he returned to a work which he had begun during the first days of the war; this was the origin of the Heroic Overture, a piece lasting a few minutes. The work received an award at the National Pre-Olympic Competition, organised as part of the preparations for the forthcoming Helsinki Olympics in 1952; however, in Poland the Heroic Overture was judged to be a formalistic work. After that verdict, the composer realised clearly that he would no longer be able to write music in harmony with his own artistic requirements; he also became seriously concerned about his own future and that of his family. 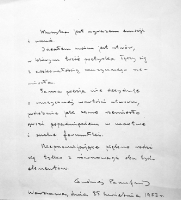 In the spring of 1953 Panufnik was instructed to head a cultural delegation to China and Mongolia. During the visit to China he received from Warsaw the tragic news that, as a result of an unfortunate accident, his baby daughter Oonagh, only a few months old, had drowned while being bathed. He returned home immediately. The death of his daughter was an enormous blow which deepened his depression and caused a total creative block. His last composition written in Poland, the Woodwind Quintet, composed in 1952, was another arrangement of early Polish music; it was a minor work, both in terms of size and artistic merit. 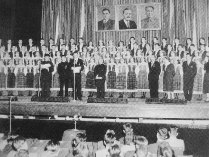 Under these circumstances, Panufnik, in increasing emotional turmoil, began to seriously consider the possibility of leaving Poland. He realised that the communist authorities, who regarded him as an ally, would not forgive him that step. He knew that if he decided to leave he would probably never be allowed to return. This was not an easy decision – he had been born and brought up in Poland, all his creative work had taken place there, it was there that he achieved success and won recognition as composer and conductor. He also knew that he would not find it easy to start a new life. However, since the expectations of the party comrades were not only not abating but were becoming increasingly demanding and intrusive, involving not only his music but also his private life, unable to live with this unbearable situation, he decided to stake everything on one card and escape from Poland illegally.

Scarlett left for London first, officially in order to visit her sick father. After her departure in March 1954, Panufnik tried to behave in a way which would not arouse the suspicions of the authorities, at the same time awaiting news from his wife, or an official invitation to participate in concerts abroad. Finally, towards the end of June 1954, he was summoned to the office of the Committee for Foreign Cultural Collaboration, in order to present a proposal for a visit to Zurich to participate in a recording of Polish music. The invitation had been issued by the management of Swiss Radio, and the recording was planned for 12 and 13 July.

Since this was supposed to be a short trip, Panufnik could take very little luggage with him. He left in Poland all the things which were dear to him. He conveyed to Zygmunt Mycielski a suitcase with family mementoes and a letter, with a request to pass it on to his brother’s daughter, Ewa.

At Zurich airport he was welcomed by the representatives of the Polish Consulate, accompanied by the Director of the Swiss Radio, the composer Rolf Liebermann. It was he, working together with Constantin Regamey, Panufnik’s wartime friend, who had arranged for the invitation to be sent to the composer, and he was aware of the planned escape to the West. With their help, Panufnik managed to avoid closer contact with the representatives of the Polish authorities and, immediately on completion of the recording, got onto a plane bound for London, to ask for political asylum there.