The beauty of nature always had a strong influence on Panufnik. Even in his youngest years he loved to walk in the park with his grandmother and to look at the trees:

I would sink on to the bench beside her, and look up at the shapes of the leaves and the swinging movements of the branches overhead. (...) I was totally happy snuggled against my grandmother, watching the trees and clouds.

He returned to these moments from childhood many years later while composing Arbor Cosmica, a work which expresses his love of trees most fully, and whose origin he explained as follows in his autobiography:

My Arbor Cosmica (...) grew organically out of my passion for trees, dating back from my childhood expeditions to the Warsaw park with my beloved grandmother. Still today I am entranced and comforted by the individual beauty of each tree; by the endless variety of shapes and colours. Always I find delight in watching the dance-like rocking branches in the wind, in listening to the song-like groaning and sighing, or the leaves rustling and whispering their secrets. Beauty, harmony, strength and order are the aesthetic qualities which seem to me dictated by the form and the life of trees. (...) Beyond the aesthetic pleasure and sensual delights of appearance, touch or smell, trees seem to me to exude some mysterious power through their moods, and through their souls.

Panufnik’s delight in nature was largely bound up with his attachment to Polish landscapes, which he missed and which he searched for in England. This is what he said in a commentary to his composition entitled Landscape:

It is an attempt to convey through music the landscape which exists in my imagination, similar to those which I have seen in Suffolk or remember from Poland – an expanse which awakens melancholy, where the far-away horizon disappearing into the distance intensifies the feeling of space and aids contemplation.

The Polish links to this composition are also indicated by the presence in its material of a short quotation from a Mazovian song.

Autumn Music, one of Panufnik’s most beautiful compositions, was also inspired by nature. Intended as a homage to the season, as a result of external circumstances (illness and death of his friend), it became a musical symbol of transience of life and inevitability of fate, where the passing of time is pitilessly measured by the regular striking of a single note in the piano’s lowest register.

It is worth adding that nature also supplied Panufnik with inspiration in the area of geometric shapes, which would provide models for his works. The arch of the rainbow might serve as an example here: it became the diagram marking out the construction of the composer’s ninth symphony, Sinfonia di Speranza, being at the same time a symbol of hope, coinciding with the work’s title (Symphony of Hope). That diagram was placed on the composer’s tomb by his relatives. 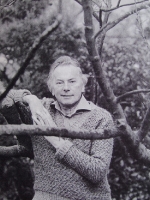