7 February sees the first performance of Thames Pageant, a cantata for children, at one of Twickenham’s primary schools.

Meanwhile, my newly established Twickenham roots led me into another composition, not significant in my creative development, but important to me because I wanted to help encourage children towards music, as well as to express my appreciation of my new environment. In 1969, I was asked to write a cantata for young singers and instrumentalists from the schools in our locality. Though I was longing to continue my experiments with my three-note cells, I accepted the commission and decided to base the cantata on the River Thames which runs right through the centre of the Borough.

The first performance of Universal Prayer conducted by Leopold Stokowski takes place on 24 May at St John’s Cathedral in New York.

In December Panufnik records his Tragic Overture and Autumn Music for the Unicorn-Kanchana record company. This marks the beginning of the composer’s collaboration with the London Symphony Orchestra which continues over many years.

Such were the feelings I invested in my Violin Concerto that I found it essential to dedicate it to Camilla. For her part, she insisted that it should be dedicated to Yehudi. I wrote to Yehudi about my dilemma, and he replied with the utmost grace that of course it should be for Camilla, and that he would dedicate his performance to her too!

I was moved to find that Yehudi had taken the trouble to memorise the whole work. Though our original intention had been that he should direct the concerto from the violin, the cross-rhythms of the fast last movement turned out to be too tricky and dangerous to risk without a conductor’s baton, so in the end he asked me to conduct the first performance, which took place under very happy circumstances at the magnificent Goldsmith Hall during the City of London Festival. 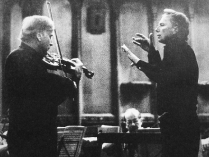 The first performance of Panufnik’s Violin Concerto, with Yehudi Menuhin as soloist, takes place on 18 July during the City of London Festival.

Panufnik composes a short chamber work, Triangles, inspired by Indian philosophy and geometric constructions, as a commission for the BBC Television.

BBC TV invited me to compose a piece with my own visualisation, with the idea that a new art form, music especially created for the television audience, should occasionally be offered an alternative to the conventional documentary filming of orchestral performances. The idea of a new art form was exciting. I decided to produce a work based on the mystical Indian Tantric philosophy and art, which I had just discovered at a London exhibition. Using the title Triangles, in reference to the two triangles which depict the basic concept of Tantric philosophy.

After an interval of ten years, Panufnik returns to composing symphonies and writes Sinfonia Concertante as a gift to Camilla for their tenth wedding anniversary.

The domestic front was calm and satisfying, seeing our two babies growing into adorable small people, manifesting not only great warmth but a strong sense of humour and marked creativity. Roxanna, initiated into music by Leopold Stokowski, appeared to have responded to his influence. Aged three, watching television, she witnessed our old friend, Ida Haendel, playing the Brahms Violin Concerto, and came rushing to her mother, crying, 'I want a violin with a stick to make it sing!' We found her a one-eighth size Japanese violin and discovered a teacher of the Suzuki method long before it had caught on in England. But Roxanna refused to follow Suzuki and learn the essential Twinkle, twinkle little star. She wanted to play the Brahms Concerto with an orchestra. Nothing else would do for her. 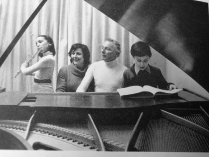 Sinfonia Concertante is premièred on 20 May at the Queen Elizabeth Hall in London, played by Les Solistes de L'Orchestre de Chambre de Belgique conducted by the composer.

Panufnik writes a brochure entitled Impulse and Design in my Music with commentaries to his compositions. 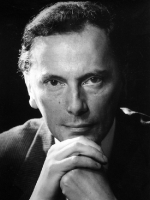 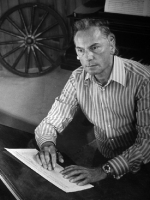 The composer writes another, his fifth, symphony, Sinfonia di Sfere.

Accepting the definition of music as 'unfrozen architecture', it seemed suddenly obvious that a composer, like an architect, might draw on the inspiration of geometric form. I could imagine that the works of Bach and Mozart would exhibit most wonderful geometric structures and patterns if a means could be found to visualise them. As I planned my next compositions, it became clear to me that each of them would have to grow organically out of its own individual geometric base. My next three symphonies - Sinfonia di Sfere, Sinfonia Mistica and Metasinfonia – were all expressions of my desire to explore to the extreme the concept of a substantial piece of music being built up out of its own geometric core.

Panufnik writes his String Quartet No. 1 and Love Song for voice and piano. 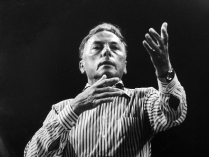 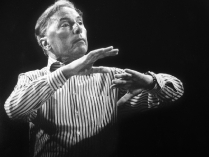 The censor’s ban on Panufnik’s work is lifted in Poland, in connection with the commemoration of the fiftieth anniversary of the establishment of the Association of Young Polish Musicians in Paris. The ban is also lifted from the work of Roman Palester.

In September, a composition by Panufnik, his Universal Prayer, is performed for the first time for many years in Poland at the Warsaw Autumn Festival.

The composer writes his next symphony, Sinfonia Mistica, and Dreamscape, a vocalise for voice and piano.

Circles were again the key to my next, sixth symphony, Sinfonia Mistica, where I drew upon the phenomenon that it takes six circles precisely equal in size to encircle a seventh cirle of the same size. Probably some quite earthy mathematical formula would explain what to me seemed a sheer visual miracle. I was unendingly intrigued by the apparently mystical significance of these circles, which struck me as a potent symbol of inner harmony. (...)

About then, I also wrote, for Peter and Meriel Dickinson my Dreamscape, using Meriel’s rich, warm voice predominantly as a musical instrument, with no words. In composing this work, I was trying to express the unconscious 'language of the soul', the mystery of dreams. Searching for different musical textures and seeking the extremes of emotional and poetic elements, I made use of quarter tones combined with my three-note cells.

Panufnik composes his seventh symphony Metasinfonia for organ, timpani and strings. This is the last in the series of geometric symphonies written towards the end of the 1970s.

I think that I came nearer to achieving this balance in Metasinfonia, my seventh symphony, composed a year later for Manchester International Organ Festival for Geraint Jones (who had commissioned my Song to the Virgin Mary). Scoring the work as a rather dramatic duo between the solo organ and the timpani with string orchestra, in my imagination I was using a double helix as a ground plan, the first half of the symphony spiralling towards the centre, the second concentrically and symetrically working its way outward again.

17 June sees the first performance of Concerto Festivo at the gala concert celebrating the 75th anniversary of the London Symphony Orchestra, who commissioned the work.

In 1979, to my great delight, I was asked to compose a special piece for the London Symphony Orchestra’s seventy-fifth Birthday Gala Concert 'at the wish of the players'. Orchestral players are famously hard to please, so I took this commission as the greatest compliment and decided to pay them a compliment in return, by composing them a special work which they could play without the dictatorship of a conductor. In recognition of their virtuosity, I intended not to make the task too easy for them. Surprisingly, the rehearsals were more unnerving and tense than the actual performance, when the hundred-strong band played together with the brilliance and precision of the finest string quartet.